Some traditions of Buddhism believe in hell realms. You are not assigned there by a deity. Your kamma (karma, in Sanskrit) determines the realm of your rebirth. Also, they are not eternal although they may be of “infernally” long duration. Personally, I’m skeptical, but as I often say to myself and others, “What the hell do I know?”

As I’m grappling with making a comic series (Pause & Reflect Comics, folks) that fuses my brand of cartoon silliness with what I understand of the Buddha’s teachings, I seem to be working on two channels.

Number one is a more-or-less traditional approach of telling a story in a more-or-less linear fashion. I’m putting words and pictures together to describe characters, situations, conflicts, friendships –all in a variety of settings. To some extent I’m attempting to follow the model of a Carl Barks comic adventure with Donald Duck or Uncle Scrooge. There are good guys and bad guys and difficulties to overcome, all leavened by some humor and with everything tied up more-or-less neatly in the end.

Channel number two is stranger. The pieces, so far, have been one-pagers. They illustrate poems –haiku, free verse. Or I have a “fragment” of an imaginary comic like the last post. This involves searching through oodles of doodles, selecting some and cobbling them together to create some sort of whole (more-or-less). This sounds to me a lot like the way some people describe the process of making art. You experiment. You get into the process without an outline. You improvise. Most of all, you play.

Channel number one is sometimes fun and sometimes feels extremely difficult. It’s like being in a stone cell prison without any windows or doors, lots of ideas bouncing restlessly around, and amid the chaos, I’m trying to dig a hole in a thick stone wall with a wooden spoon. It ain’t easy! And is it ever s-l-o-w!

It’s not a coincidence that this dichotomy relates to something I raised when I first started this blog. I wrote about the difference between making comics and drawing spontaneous doodles and how the doodles often had a kind of loose, joyful quality I couldn’t seem to capture in the more formal comic book story process.

At least now, the doodles are being synthesized into comic book pages. That’s a step up.

Channel number one is the part of this comic is going to do the real synthesis of dhamma and comic book art (I hope). Edzl, an extraterrestrial with an alien culture and physiology, is going to try to understand some Terran teachings from 2500 years ago in our past.

I’m making some small progress here. I have an outline for four connected story segments and a couple of black-and-white pages on segment one. This part involves spaceships, space pirates, a death trap, secret gizmos, and a Nebboid traitor.

The important part of the first segment in terms of Buddhism, is that Edzl experiences a brief but profound epiphany that shakes up his comfortable notions of what reality is all about. This corresponds to an experience I had when I was 18 years old that lasted all of a minute, but was a life-changer.

But back to the demons. These faces all just doodled out of my pen. There was never an intent to create a monster or a fugitive from a horror show. To me, they’re just people, just as all people are, in my opinion, cartoon characters, whether we know it or not. OK, maybe the yellow-eyed guy in the middle and the one-eyed guy at the bottom are not your typical neighbors, but they still count as people in my (comic) book. 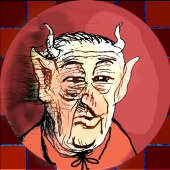 One guy came out looking like L.B.J. Don’t ask why. It wasn’t intentional. I realized that I had to take him out of the portrait gallery. I didn’t want to make a political statement or a judgement. These days, despite the horrors of Vietnam, Lyndon Johnson may seem like a genuine statesman. But this was too much a dose of reality for the portrait gallery. They are supposed to be imaginary demons. We’ve got enough of the real kind here on the planet with us. We also have lots of people with us who have created their own hells and are living in them, suffering in them.

May they somehow find peace and ease of well-being!

Asteroid Stu and the Mind-Duel, also on Amazon in print and Kindle, right here>>