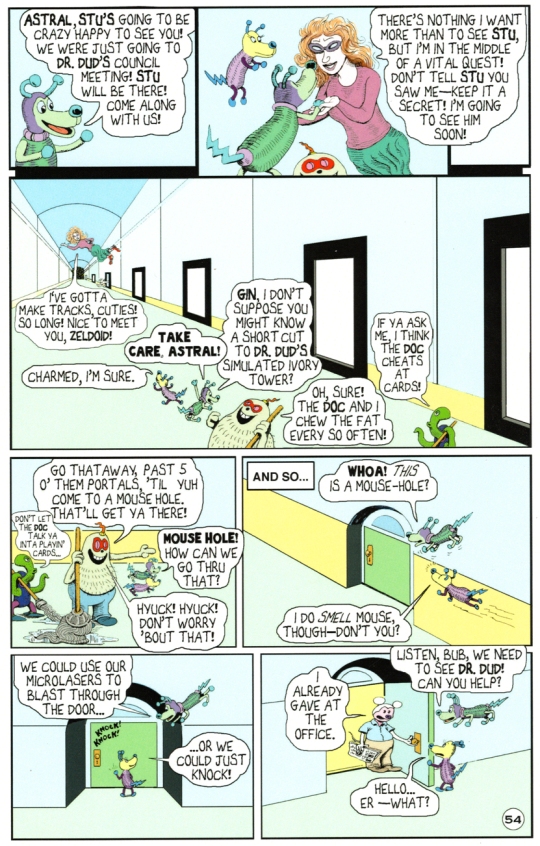 The title from this posting comes from the cover of Multiverse Comics and Stories. A newscaster (Frank Serious, of station WSIT) is announcing that “Scientific evidence was uncovered today that proves conclusively that existence is much goofier than previously surmised.”

The truth is, this is actually old news.

It goes back at least to 1904 when a twenty-five year old Albert Einstein begins to undercut the basis of Newtonian physics. From there on, physics gets weirder and weirder.

I like to read books on theoretical physics even though they are leagues over my head. That’s as long as they don’t get bogged down in math because I won’t even go there. Seven Brief Lessons on Physics, by the eminent Carlo Rovelli is a great, nontechnical summary of contemporary physics. It’s a collection of newspaper articles Rovelli wrote which were collected in book form and became an international best-seller.

I’m currently reading another of his books, Reality Is Not What It Seems: The Journey to Quantum Gravity. Rovelli is one of the founders of “loop quantum gravity theory,” which is a heroic effort to reconcile Einstein’s revelations with the powerful, but perplexing framework of quantum physics.

As I’ve mentioned before, some of the leading quantum theorists stubbornly persisted in ignoring philosophical implications of quantum science. It worked. That was enough. “Shut up and calculate,” was one of the mantras.

Rovelli is not one of those. He is well-acquainted with both the history of science and of philosophy. His desire to make the revolutionary perspective of current theoretical physics to the layman shines through his writing, thanks in part, no doubt, to translators Simon Carnell and Erica Segre. He shows us how the familiar, sensible physics of Isaac Newton, which continues to be a part of our outlook, our culture, and mythology, is a useful fabrication, but one that fails to describe ultimate reality.

His book starts 2600 years ago with some Greek philosophers that are relatively unknown compared to Aristotle and Plato, but who intuitively came remarkably close to understanding some of the aspects of modern cosmology.

This is also the time the Buddha taught and there is an interesting convergence that other contemporary writers have noted between contemporary physics and Buddhism. One example is the understanding that there is no external world of objects, that all is process and relational. Time itself, Rovelli demonstrates, is a useful convention that belies its true relational nature.

I won’t try to summarize the book. Better writers than I have done that and if you are interested in this sort of understanding I recommend Rovelli’s books wholeheartedly.

One little bit I enjoyed was learning that the great genius Einstein, compared to his colleagues, was not a mathematics whiz. He needed help with his math, but his intuitive penetration of the nature of the universe was second to none.

Buddhism also values an intuitive understanding of the nature of mind and reality that goes deeper than intellectual processes. Fortunately for us, we don’t need to be geniuses to access this understanding. But it does ask for a continuing diligent awareness and a curiosity about the nature of human existence.

In “Mystery,” the last chapter of Reality Is Not What It Seems, Rovelli writes:

The world is more extraordinary and profound than any of the fables told by our forefathers…To accept uncertainty doesn’t detract from our sense of mystery. On the contrary: we are immersed in the mystery and the beauty of the world. The world revealed by quantum gravity is a new and strange one –still full of mystery, but coherent with its simple and clear beauty.

It is a world that does not exist in space and does not develop in time. A world made up solely of interactive quantum fields, the swarming of which generates –through a dense network of reciprocal interactions space, time, particles, waves, and light.

We humans are also not what we seem. We are not what we think we are. We are more mysterious and strange than anything of which our prodigious imaginations can construct. But we have the ability to penetrate this mystery by looking within with patient, persistent, curiosity.

Next time: Four more pages of “The Case of the Renegade Refrigerator.” Find out about the dreaded Rhombulans and their threat to destroy our solar system!