We interrupt your irregularly scheduled “broadcast” of Asteroid Stu and the Mind-Duel to bring you a special blast from the past. Our archaeological team has dug deep into the strata of fossilized doodles (otherwise known as “The Archive”) to bring you the first Asteroid Stu comic created. This was sometime in the early 90’s and was co-produced by our first computer.

The cover (above) shows Edzl, sunning himself on the asteroid. This is evidence the cover was created after the “Stu in Cyberspace” comic. Edzl hadn’t yet to spring from the imagination matrix when the comic was created. 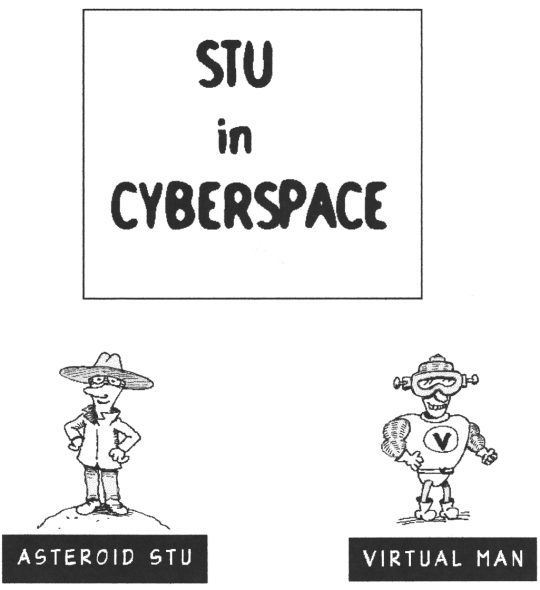 This is the title page. Remember when “cyberspace” was the buzziest of buzz words? Maybe you don’t unless you’re a geezer like me. 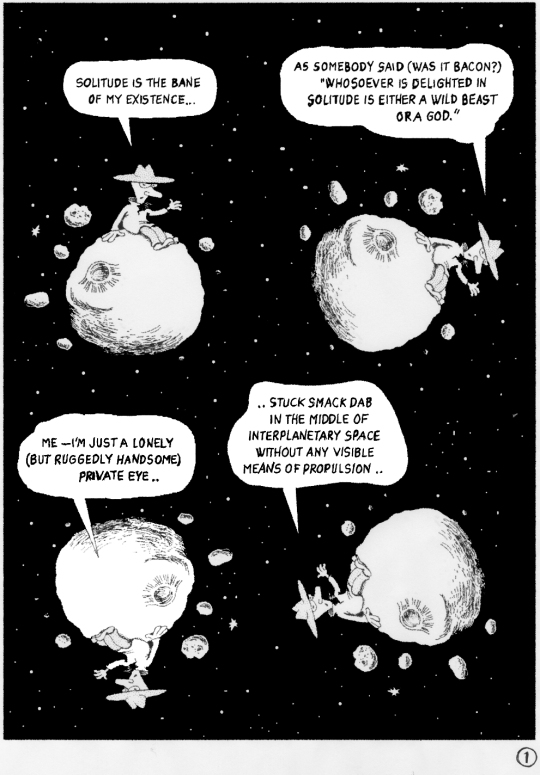 I’ve avoided the urge to fuss with these images and I’m just going to load them all on, warts and all. There’s 15 pages so this will be a long post. Maybe you should get a fresh cup of coffee. 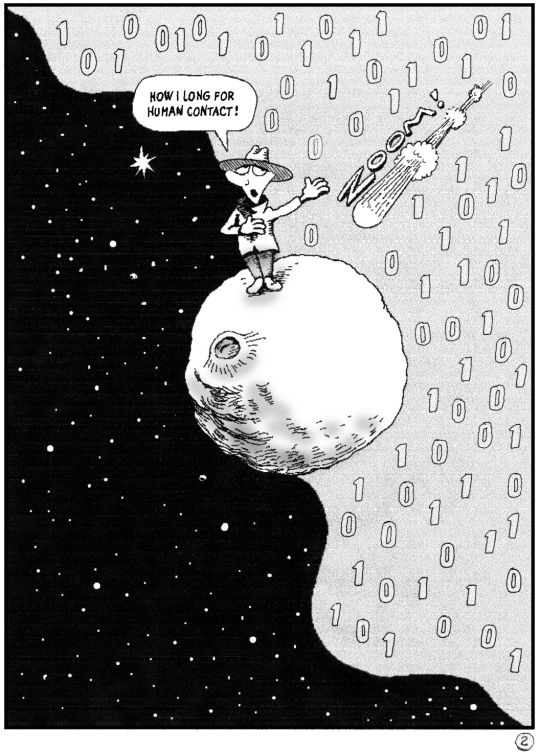 I’ll continue to chatter as I do so, which will of course make it even longer! 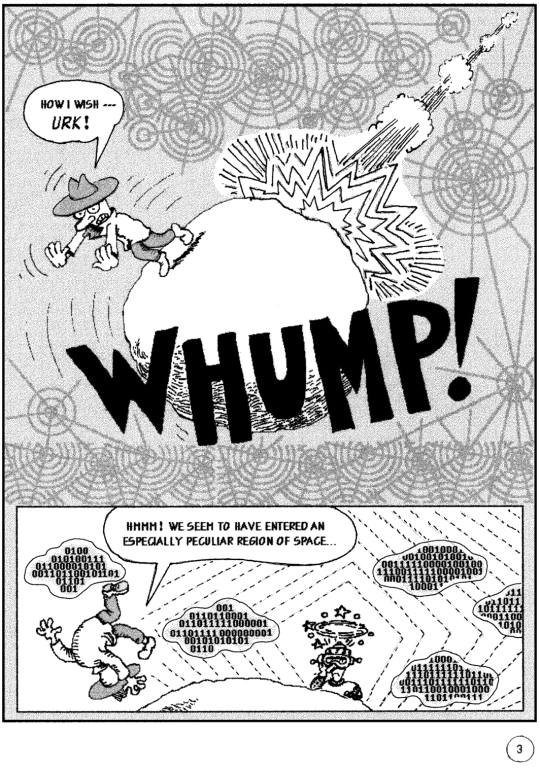 Let’s talk about something else. I wanted to give notice that the recent MacArthur “Genius” awards went to a couple of my favorite artists. 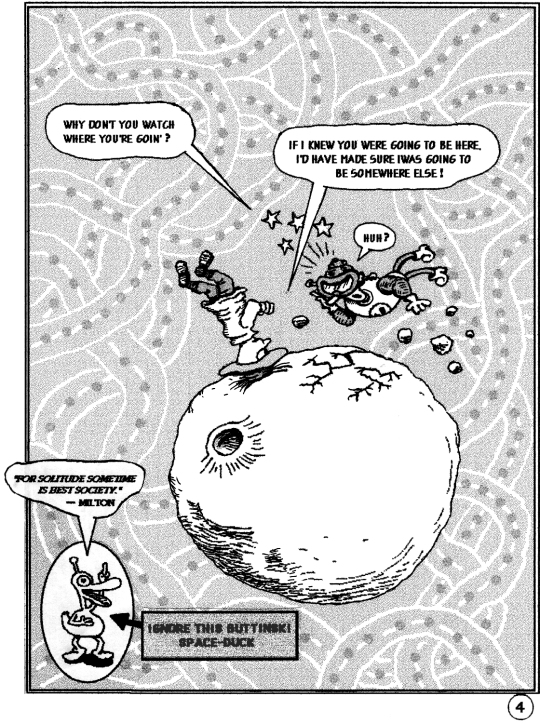 The first is Lynda Barry, who I’ve extolled in Chimera Spoor previously. She came to a point in her career as an “alternative” comics cartoonist when she realized she, to paraphrase another cartoonist, Bill Griffith, the creator of “Zippy the Pinhead,” “…wasn’t having any fun, yet.” She rediscovered what made comics, drawing, and writing fun and started a new career as a teacher. She is Associate Professor of Interdisciplinary Creativity in the Department of Art at the University of Wisconsin at Madison. Her courses, open to any student in any major, have had a remarkable ability to put people in touch with their creative energies. She is also influenced by Zen Buddhism! Her connection to Zen was indicated in a recent article in Lion’s Roar and it links to a 2008 article in Tricycle on traditional ink and brush drawing and her own approach in painting meditating monkeys. (Her instagram account is “the nearsightedmonkey” and often shows off student work.) She’s a marvel and a wonder! Congratulations, Ms. Barry!

The other fave artist is a musician I have long admired, Mary Halvorson. She studied at Wesleyan University (where I once worked briefly as a library assistant) under jazz legend, Anthony Braxton. She’s a formidable composer and guitarist and Bending Bridges, Saturn Sings, and Illusionary Sea are wonderful albums of larger ensembles she’s lead. She also has an amazing trio, Thumbscrew, which I got to see live in Philadelphia about four years ago. Another of my favorite albums is a quartet lead by jazz cellist Tomeka Reid which includes Mary Halvorson. Among the jazz enthusiasts I know, none of them mirror my enthusiasm for Ms. Halvorson. Her award seems a validation of my admiration and I’m sure her followers will grow! Congratulations, Ms. Halvorson! 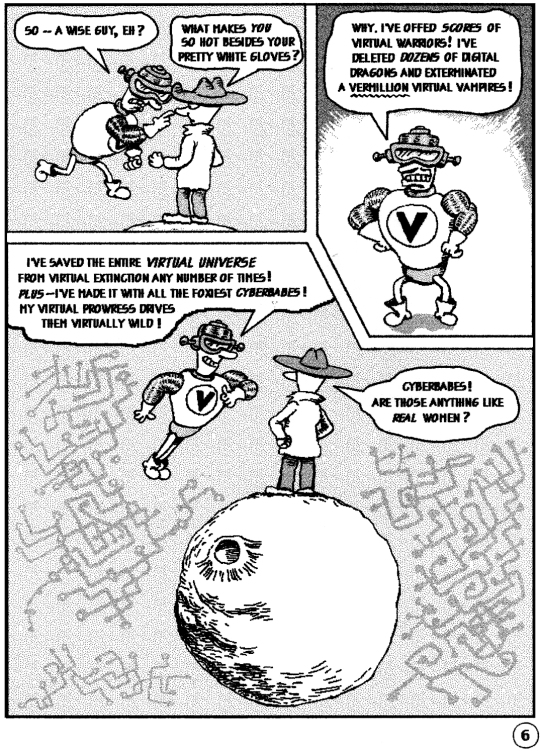 –Back to the art of cartooning! I’ve just read a remarkable graphic biography by Bill Griffith, the creator of “Zippy the Pinhead,” and a nonpareil in the world of cartooning. I think he’s overdue for a MacArthur genius grant. He was one of the prime movers in the underground comix revolution and has been supplying his Zippy comic strip to newspapers and other sources for decades. Nobody’s Fool is the biography of Schlitzie Surtees, a real-life microcephalic who was featured in carnival and circus sideshows and was in filmmaker Tod Browning’s 1932 cult classic, Freaks. The movie was instrumental in Griffith’s creation of Zippy, who is a very different sort of person, but who shares some of Schlitzie’s aspects. The book is a remarkable labor of love (“fifty-six years in the making,” as Griffith says). It’s compassionate and unflinchingly honest at the same time. 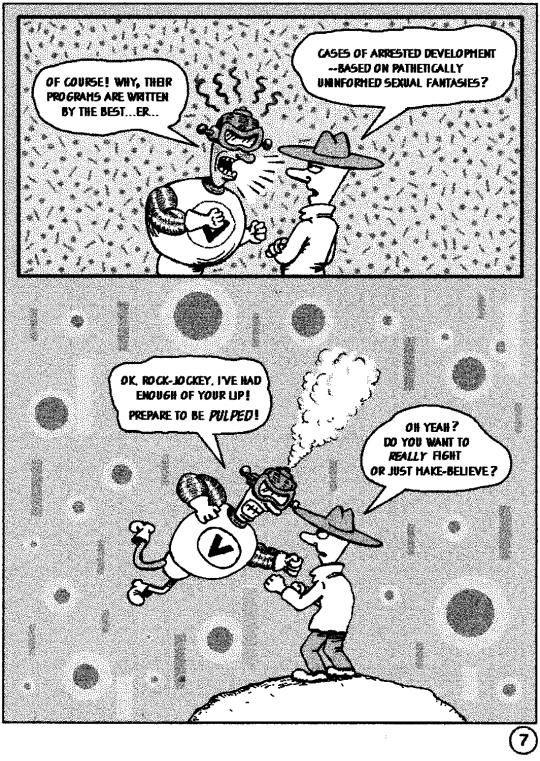 It’s getting late and amazingly, I’ve run out of chatter. I’ll just add the rest of the pages of this beginner’s attempt at merging computers in comics from about 30 years ago without additional comment. Next time “Asteroid Stu and the Mind-Duel” will continue. 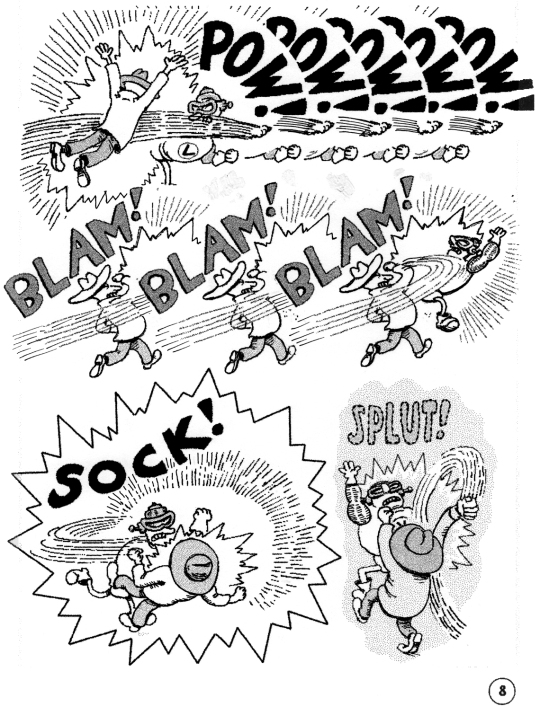 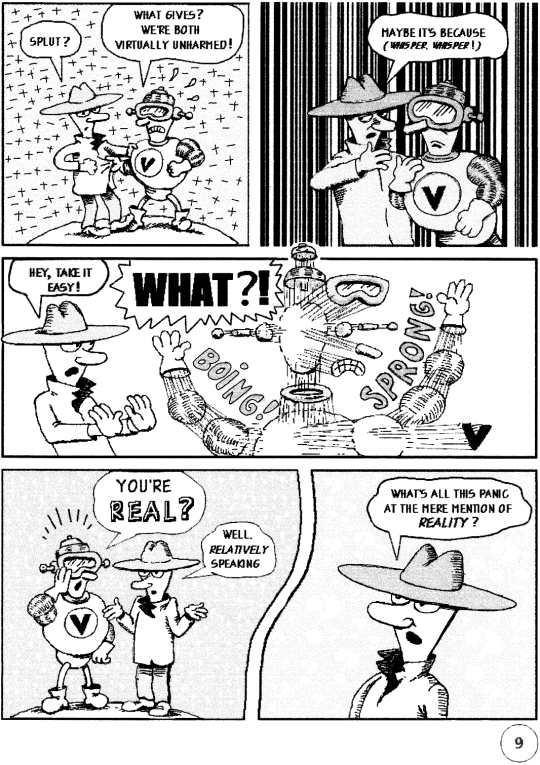 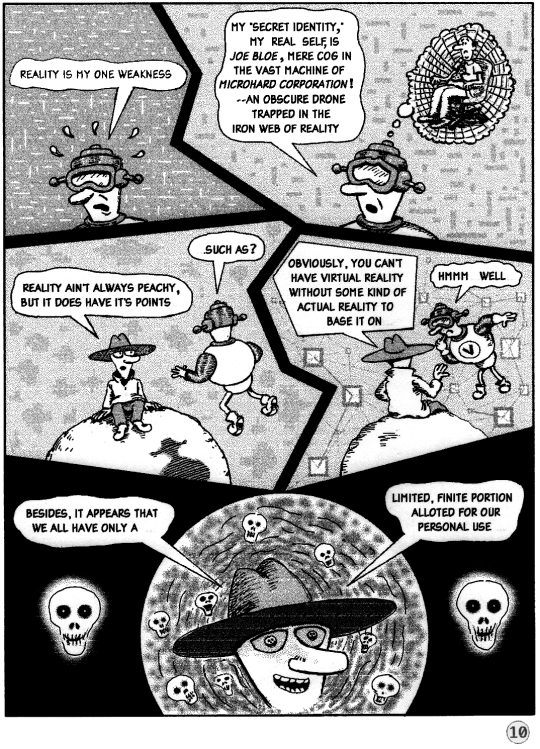 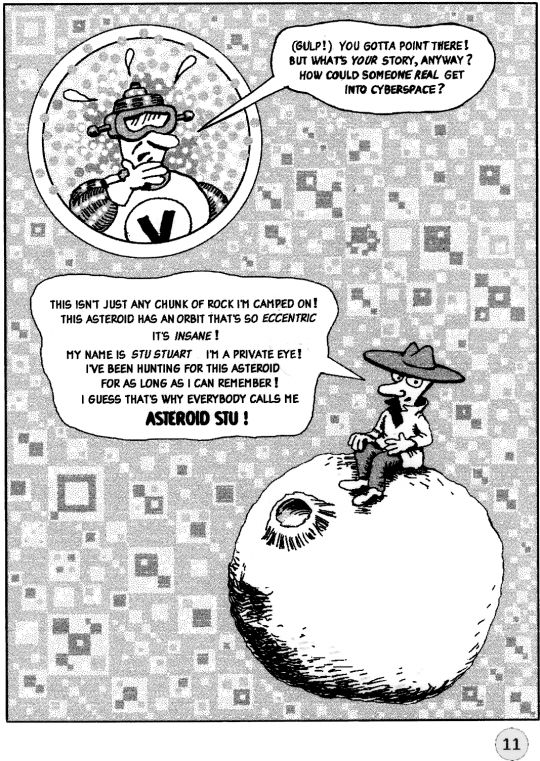 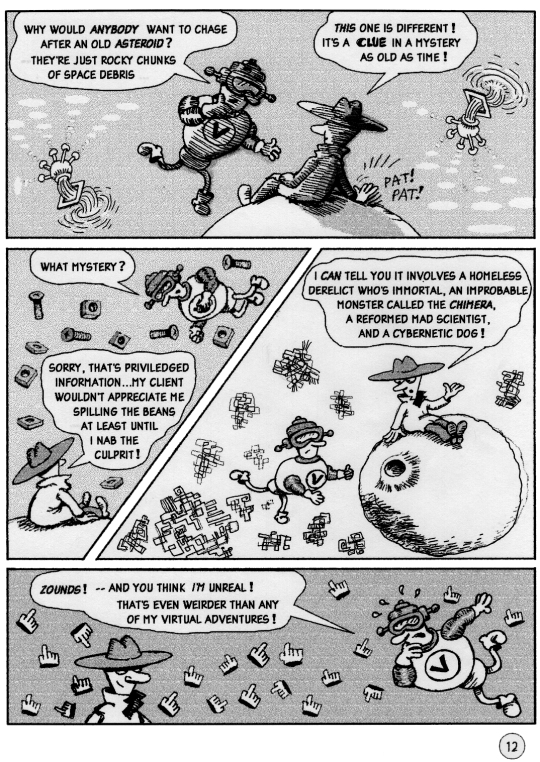 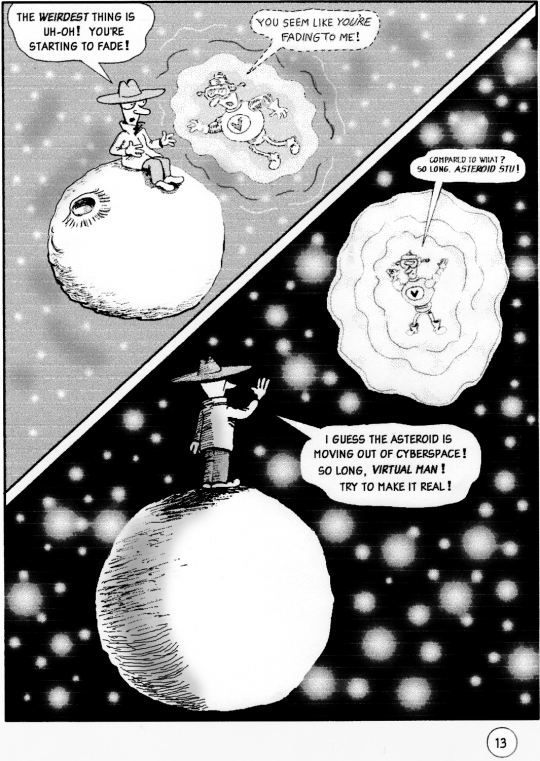 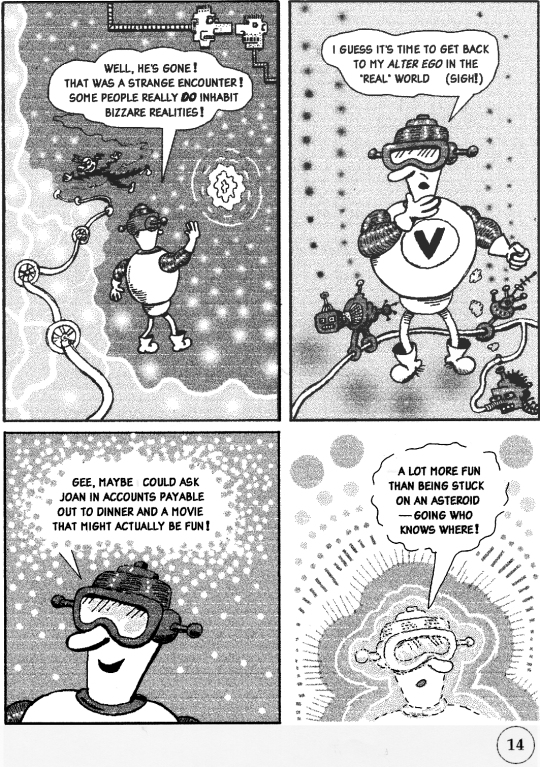 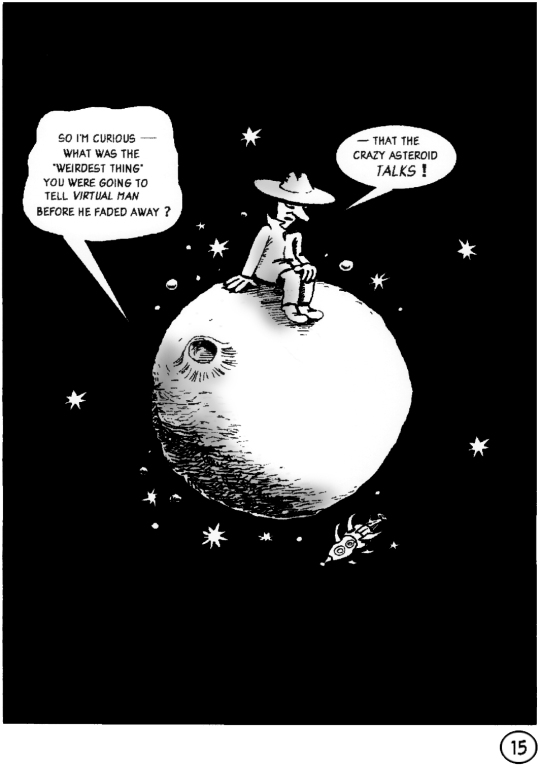 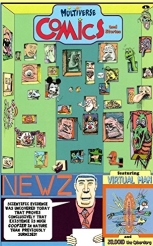 Multiverse Comics and Stories, 106 pages, full color, is available from Amazon in Kindle and hardcopy formats. 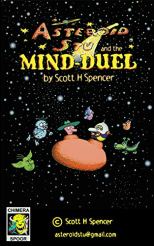 Asteroid Stu and the Mind-Duel, 54 pages, black and white interior, is also available in Kindle and hardcopy formats from Amazon. Both comics include Edzl, the Nebboid from the Vague Nebula, who will be the lead character in a running feature story, “Edzl’s Awakening: Or, Yes We Have Some Nibbanas.” This will be part of Pause & Reflect Comics, currently in progress.